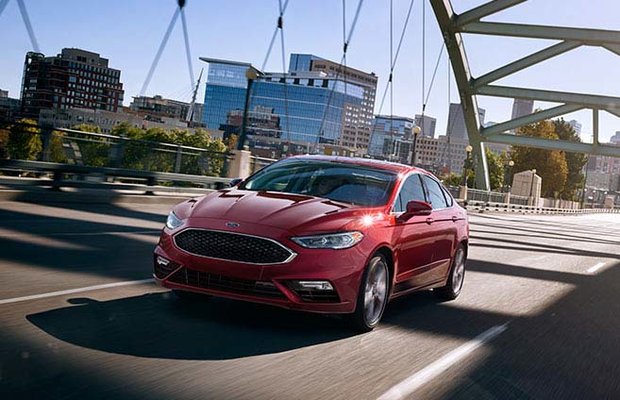 The 2017 Ford Fusion is a midsize sedan widely regarded as one of the most comfortable, spacious, and good-looking offerings in what is an extremely competitive segment.

This impressive car's attributes don’t end there though, as it's also fantastic to drive and packed with the latest technology and equipment. The Ford Fusion benefits this year from what is a pretty mild refresh, which includes lightly updated styling to the front and rear, some interior enhancements and a new, high-end Platinum trim level. Perhaps the most exciting change for the 2017 model year is the addition of a new performance model in the shape of the Fusion V-6 Sport.

TRIM LEVELS & POWERTRAIN OF THE 2017 FORD FUSION
There are now five different trim levels of 2017 Ford Fusion, which start with the S and finish with the new Sport model, with the SE, Titanium and Platinum trims in between.

If you are particular about engines and you like to have plenty of choice, you're going to love the latest Fusion lineup. Even if you disregard the hybrid and plug-in hybrid models, there are still four different engines and three different six-speed automatic transmissions to select from.

The base engine is a 2.5-litre I-4 i-VCT developing 175 horsepower and 175 lb.-ft. of torque, and it's available with a choice of front or all-wheel drive in the SE, but it's front-wheel drive-only in its entry-level S form. Next up is a 1.5-litre EcoBoost unit producing 181 horsepower and 185 lb.-ft., but this one is only available as an option with the SE trim. The third engine is the standard unit in Platinum and Limited trims and it's a seriously good 2.0-litre EcoBoost I-4 putting 240 horsepower and 270 lb.-ft. of torque at your disposal.

Drivetrain & Fuel Efficiency
The new V-6 Sport version of the 2017 Ford Fusion gets its own 2.7-litre EcoBoost V-6, and it's appropriately all-wheel drive-only. This one definitely lives up to its Sport designation with 325 horsepower and 350 lb.-ft. of torque, as well as a quad exhaust with chrome tips.

Styling
Although there is now a distinct Sport model in the lineup, it's hard to ignore the fact the all the models look pretty sporty for a midsize sedan, especially as far as the various wheels are concerned. While the V-6 Sport gets the kind of stunning 19-inch premium painted alloys you'd expect to see on such a car, don’t think you have to put up with steel wheels and hub caps on the base S model. The S gets a fetching set of 16-inch painted aluminium wheels, and they just get even better from there as you go up the trims.

The Ford has been one of the cars to beat in the fiercely competitive midsize sedan segment for some time now, and it's a situation unlikely to change with the refreshed 2017 Ford Fusion.