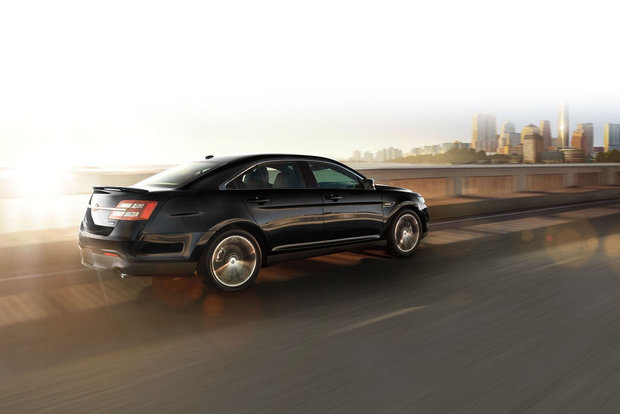 Vickar Ford has an impressive selection of 2017 Ford Taurus sedans. Stop by our dealership when you are in Winnipeg to take a test drive of this car.

The 2017 Ford Taurus is the Blue Oval's flagship sedan, and although it only entered production in 1985 as a 1986 model year, we're already into what will now be the eighth model year of its sixth-generation. Don't be confused by the fact there's what some see as a seventh-generation model that's now been launched onto the Chinese market as a Taurus. This is a model based on the Lincoln Continental's CD4 platform and it's a close relative of what we know as the Fusion, and although it may appear in other markets eventually, it's only available in China for the moment.

From its launch until the 2007 model year, the Taurus was categorized as a midsize sedan, but it's now been a full-size offering from the fifth-generation's arrival in 2008. The Taurus is the flagship sedan of the current Ford range, with all the comfort and technology you'd wish to see in such a model. The early incarnations of what is now the 2017 Ford Taurus were fairly lean models with a design considered at the time to be quite radical, but the latest version is a classic full-size offering that competes against the likes of the Chevy Impala and Toyota Avalon.

TRIMS OF THE 2017 TAURUS
There are now four different trim levels of 2017 Ford Taurus with no fewer than three engines to select from. The trims start off with the SE and progress upwards to the SEL, Limited and SHO models.

The standard engine in all but the top-of-the-range SHO model is a 3.5-liter Ti-VCT V-6 that gives the driver 288 horsepower and 254 lb.-ft. of torque to work with, which is sent to the front wheels through a six-speed SelectShift automatic that's in all versions of the 2017 Ford Taurus. The SE, SEL and Titanium trims also offer the option of upgrading to a 2.0-liter EcoBoost inline-four, and this engine produces 240 horsepower and 270 lb.-ft. of torque along with better fuel economy than the standard engine. The most powerful engine offered for the Taurus is therefore reserved for the highest SHO trim, and this time it’s the excellent 3.5-liter V-6 EcoBoost that puts an impressive 365 horsepower and 350 lb.-ft. of torque at your disposal.

While the entry level SE trim is only available with front-wheel drive, all-wheel drive is an available option for SEL and Platinum trims, and comes standard with the SHO.

Comfortable & Refined
It shouldn't be much of a surprise that the 2017 Ford Taurus delivers big time on refinement, as it's been one of its key virtues for some time now. Everything about the car appears very well put together, and the interior trim looks good and feels pretty substantial it has to be said. The ride is fairly firm, which contributes to an enjoyable driving experience, but you'll still find it more than quiet and comfortable enough in all its trims. The available 20-inch alloy wheels certainly look good, but as is usually the case with larger wheels, the ride does firm up a little more if you decide to go with them.

Anyone going away in the Taurus who has a lot of luggage will be more than happy with the Ford, as its trunk delivers more than 20 cu.-ft. of cargo space. That's a lot, even for a full-size sedan, so it's a good example of just how practical a vehicle the Taurus really is.