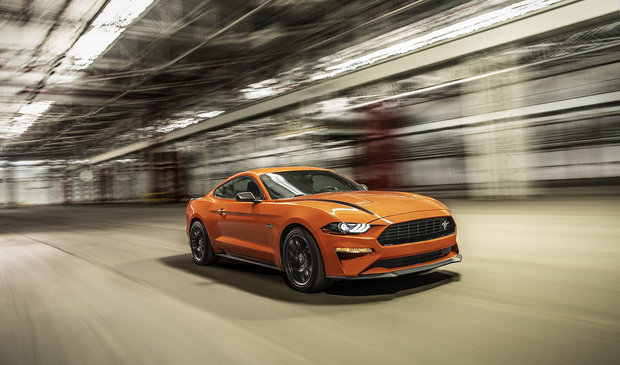 The new 2020 Ford Mustang was unveiled in April and although it hasn’t changed the Mustang tried-and-true DNA and personality, it does get some pretty significant improvements starting with the High Performance Package offered on the Ford Mustang EcoBoost just in time for summer.

Added to the 2.3-liter four-cylinder EcoBoost engine making it the first ever EcoBoost engine to be tuned by Ford Performance, the special package ups the power to 330 horsepower and 350 pound-feet of torque which makes this engine one of the most powerful of its kind in North America. Inspired by the four-cylinder 2.3-liter powering the Ford Focus RS, the new EcoBoost engine in the 2020 Ford Mustang is paired with a range of other improvements that keeps power contained and controlled.

Examples include brakes taken from the V8-powered Ford Mustang GT as well as a suspension setup and aerodynamics also taken from the GT, this time the GT Performance Package. Unveiled just in time for the Ford Mustang’s 55th Anniversary, the High Performance package available on the four-cylinder, 2.3-liter Mustang was approved and developed in just under 10 months and makes the entry-level Mustang the most powerful four-cylinder car offered by an American automaker.

“The Ford Performance Focus RS 2.3-liter engine is a high-revving marvel, and anyone who’s driven this EcoBoost engine instantly loves how quickly it responds and delivers power,” said Carl Widmann, Mustang chief engineer. “When our team got the chance to try this specially built engine in a Mustang, we immediately agreed, ‘We have to do this.’”

Thanks to its upgraded power and tuned components, the 2020 Ford Mustang EcoBoost gets to 100 km/h in under 5.0 seconds which is truly remarkable. It’s as fast as some of its V8-powered competition. Of course, power is nothing without handling and the tuned suspension plays a remarkable role in keeping the EcoBoost Mustang firmly planted on the road. Pair the independent suspension with a near-perfect 53/47 weight distribution and you have a new Mustang that’s as fast in a straight line as it is on a winding road.

To learn more about the 2019 Ford Mustang, contact us today at Vickar Ford!