Everything You Need to Know About Ford’s Ecoboost Technology

Everything You Need to Know About Ford’s Ecoboost Technology 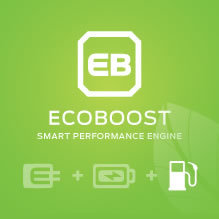 You may be wondering what it is exactly, and more importantly how it can help you save fuel.

If you have been in the market for a new Ford vehicle, or if fuel economy happens to be something that is very important to you and you have researched different technologies that help lower fuel consumption, it is very possible that you have stumbled across Ford’s EcoBoost system.

WHAT IS FORD’S ECOBOOST?
Although anything that has to do with automotive engineering is often complicated and difficult to put into simple terms, we will do our best to explain EcoBoost. For starters, the system was co-developed with German firm FEV engineering and from the get-go the objective was to find a way to offer enough power to satisfy consumers in a way that wouldn’t penalize them in the fuel economy department.

There are plenty of EcoBoost engines currently in the Ford lineup, and they have different horsepower and torque numbers, and different objectives as well. You can get an EcoBoost engine in the new 2017 Ford F-150, but you can also get one in the 2017 Ford Mustang. These are two very different vehicles with two very different purposes. That said, in both cases EcoBoost aims to improve fuel economy while also achieving the output levels desired by consumers.

Turbocharging and Direct Injection
At the heart of EcoBoost is the turbocharger that forces air into the engine in order to increase power without having to make the engine bigger which would increase fuel consumption. Then, EcoBoost engines also take advantage of direct fuel injection which is a simplified process of feeding fuel to the engine. Anytime something is simplified when it comes to engines, it means that it is more efficient.

In summary, EcoBoost uses turbocharging and direction injection to make the engine more efficient and achieve high levels of output without the corresponding increase in fuel consumption.

To learn more about Ford’s EcoBoost technology, contact us today at Vickar Ford!