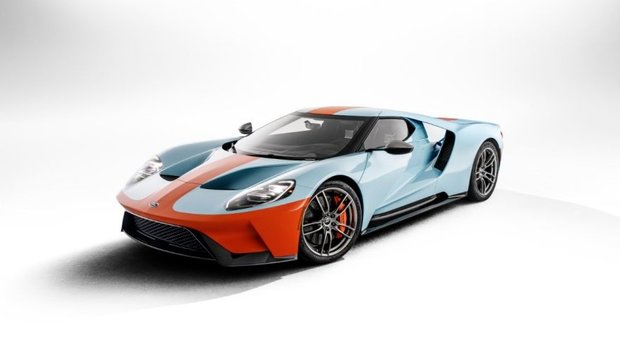 We’ve all seen the legendary Gulf Oil light blue and orange over the years. No other color combination is as remarkable or noticeable or as well-known as this livery in motorsport circuits. Seen on the previous Ford GT40 and Ford GT of the 2000s, the paint scheme is back with the 2019 Ford GT Heritage Edition.

“Many view the Gulf Oil paint scheme as the most famous in motorsports,” said Joe Hinrichs, Ford president, global operations. “The 1968 GT40 quickly became a global sensation after beating its European competitors on the track four times in a row, and in honor of the 50th anniversary of its win, we’re paying fresh tribute to the original with a new heritage limited edition.”

If you’re a racing afficianado, you know that the first car to sport the Gulf Oil colors was the 1968 Ford GT, also known as chassis No 1075. That car was one of the few in existence to win the 24 Hours of Le Mans on more than one occasion.

The Heritage Edition GT will not only feature the iconic paint job, but it will also come with exposed carbon fiber accents both inside and out as well as the No. 9 graphics. 2020 models will feature the number 6 to honor the number of the Ford GT that won the 1968 Le Mans.