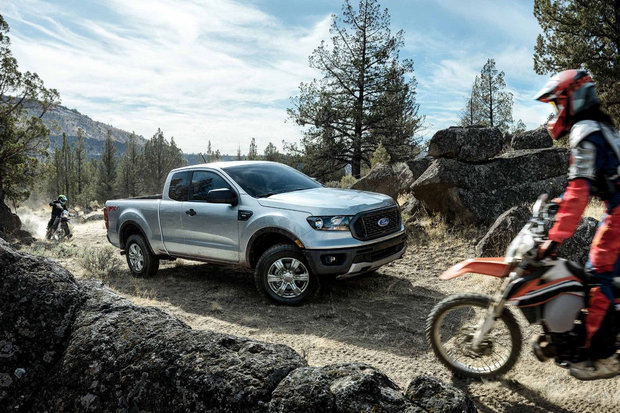 It has been around Europe for a while now, but North American consumers are finally about to get their first look at the 2019 Ford Ranger. That said, buyers here will be getting much more than simply a euro-spec Ranger. We are getting a new generation of the Ford Ranger, and one that has been designed with the needs of North American consumers in mind.

The 2019 Ford Ranger features a bold, rugged design that makes it appear bigger than it actually is. It may be a mid-size pickup, but you won’t have that feeling when you step inside the new Ranger, or when you look at it from your window.

Featuring a robust grill and a massive overall design, the Ranger will stand out on the road. It looks like a Ford F-150 in a way, but it will still be easy to tell each vehicle apart out on the road. In terms of design, Ford has done very well with this new Ranger.

Although we don’t know everything there is to know about the 2019 Ford Ranger just yet, we do know that it will be available in three trims when it arrives in Canada towards the end of 2018. It will also be offered in a more rugged FX4 Off-Road version which will include beefier shocks, tires that are better suited to off-road use, and some added protection under the body.

Power will come from a 2.3-liter turbocharged four-cylinder EcoBoost engine with a forged steel crankshaft. This engine delivers 280 horsepower and 310 pound-feet of torque in the Ford Explorer, but we don’t know how much power will be developed by the new 2019 Ford Ranger. What we do know, however, is that it will feature a very-advanced 10-speed automatic transmission.

With the new Ford Ranger, Ford is set to position itself in the mid-size truck segment with a pickup that is sure to feel anything but mid-sized. To learn more about the 2019 Ford Ranger, contact us today at Vickar Ford!